I’ve been meditating a lot about meditation. I think it’s fair to share that for the last number of years my meditation practice is tied to the 1st cup of morning coffee (see photo). My ritual begins by lifting the lid of the large Bialetti Italian espresso maker as it steams up on the propane stove top. The sound changes as black oily goo cascades out of the central pillar and I watch as the crema builds, only to extract my cup at the halfway point when it is the perfect combination of brewed strength and flavour.

This ritual is even more pronounced and elegant for tea drinkers. The selection of a beautiful teapot, warming it with water, selecting the tea steeping it just right. The Japanese tea ceremony is a Zen Buddhist refinement of this experience of making tea and imbuing it with the spirit of Harmony, Peace, Respect. There is purity and simplicity in this ancient practice.

Yoga with Celeste on Salt Spring Island was the closest that I have come to embracing the notion of the mind-body-spirit connection and the power of being deeply present to the moment. Internal connection through a guided series of movement and we enter a meditative state. The addition of the chanting of OM, Shanti Shanti Shanti OM and of Shavasana which ended the session, always left me with a deep feeling of peace. This reminds me that Lynda has a favourite T-shirt that reads “I am just here for the Shavasana.“

Prayer in a way may serve as meditation for many people and is central to the experience of most religions. I remember how I felt, perched on a bench at the Metropolitan United Church in London, Ontario with family members when the late Reverend Dr. George W. Goth having finished his sermon, would close with a prayer that always ended with: The Lord bless you and keep you; the Lord make his face shine on you and be gracious to you; the Lord turn his face toward you and give you peace. Dr. Goth would extend the word peace for what seemed like a minute p-e-a-c-e…

As a young man hitchhiking through Europe having run out of funds and desperately hungry, I was invited to a meal at the Hare Krishna temple in Athens. A beautiful meal prepared by a fellow McGill grad from Montreal, was preceded by lots of chanting: Hare Krishna, Hare Krishna, Krishna Krishna, Hare Hare Hare Rama, Hare Rama, Rama Rama Hare Hare…
The devotees shared the belief that the sound vibration of this mantra had a direct impact on the human soul which they believed was spiritually asleep. I thought of George Harrison. I admired the saffron robes.

This was overall a significant experience for me being profoundly hungry, wrapped up in vigourous group chanting with the smell of food wafting through the temple. I have to admit I did get into an altered state.

Now, meditation for me is forest walks with our dog Sadie, sitting on the deck looking out at the ocean, listening to Van Morrison: “no guru, no method just you and I in nature.” And of course the first irresistible morning cup of black gold…

The idea of ‘guided’ meditation was introduced to me by Lynda a number of years ago. She will explain more about it below, but I will share that a deep dive into it was recording beautiful and profound guided meditations that Lynda had written. These were produced under the creative guidance of Daryl Chonka at his Old Growth recording studio in Burgoyne Bay. Lynda and I used spoken word to bring about feelings of internal peace, harmony and well-being.

I hope our NEW Meditation and Journaling tools will bring you these feelings as well… peace, harmony and well-being.

I love guided meditations! I have used them for years in my past work as a counsellor helping people recover from burnout and stress symptoms. I use them now in workshops, retreats, and writing for wellness events. I also often use them as a companion mindfulness practice alongside of my journaling.

I love doing a guided meditation before I journal.

Try combining guided meditation and journaling for yourself!

You can discover places of greater ease, flow, and self-awareness with the help of guided meditation and journaling combined with these NEW Meditation & Journaling Tools 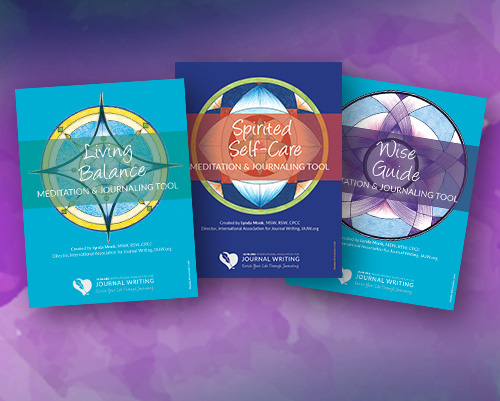 Author: Peter Allan is a much loved guest contributor to our Journaling Museletter and Blog.  Peter is an artist, a father, the founder of a new Youth Climate Activism Award and more.