“Anything of importance should be written down to be conserved.” Wm. Anthony Connolly

What is your name or the name you like to go by?

Anthony Connolly, but the name I publish works under is Wm. Anthony Connolly. Wm is the initials for William, which surprisingly a lot of people don’t realize. My name has given me no end of grief, to be honest. When I was a young reporter, back in the mid 80s in Canada, I used the byline Wm. Anthony Connolly, and I was considered by friends to be super pretentious because of it. So, I dropped it for years, simply using Anthony Connolly for journalism bylines. When my debut novel was accepted by a small Texas publisher – I was living in the Lone Star State at the time – I asked that my name appear as Wm. Anthony Connolly, again; why? Because it’s my name, and I like now that it’s a complication as it was for my parents, my family, who always called me by my middle name, but I could gleefully tell others on the marble-fields and playgrounds of my youth, that I had a first name, but didn’t go by it. To this date the initial Wm mystifies some; one person asked me if it was an honorific title? I said yes it was, but didn’t elaborate or dissuade him of his misunderstanding.

Where do you live?

Mostly in my mind. But, physically, the United States. Currently, Dyan, I, and our two fur-boys, Hemingway Short Story and Professor Leo Tolstoy call the Delmarva Peninsula home, which consists of the oddly shaped conglomeration of states of Delaware, Maryland, and Virginia. We are never thirty minutes away from the tumultuous and gorgeous Atlantic.

Why did you join the IAJW?

Writing is a solitary life, and I have done it for a very long time. I also work from home, teaching graduate level creative writing (going on eight years now) and so I don’t see or interact with a lot of people. Joining this association provides me with a linkage to the outside world, with community, and a sense of solidarity with those who prize writing things down.

I’ve written so many times about journal writing, below is my favo(u)rite response, it’s an essay entitled Dead Me Scrolls <available at: http://fraglit.com/lwc/archives/42>:

“Because of its permanency, the written form exerts a conservative influence on language: it may break, prevent, or even reverse changes. In contrast, the spoken form is ephemeral and the source of all change.”
—Laurel J. Brinton and Leslie K. Arnovick in The English Language

Anything of importance should be written down to be conserved. Not everything is traceable, not everything has a flashpoint, a crater; a flag planted, a voice in the incessant chorus of history. Chatter dies, syllables on the page last, if only longer. So much is lost, if there are no attempts at conservation. I am a conservationist and I am in the conservation business. But of what exactly, other than language, am I preserving I’m unclear, other than I record that which speaks to me in a tug, or a whisper, a repetitive presence perhaps or simply a yearning to make sense of time.

I conserve because not everything leaves its mark, a trail of dicta, of paper or bone. Traces are easily erased by memory and by might; some marks are merely assimilated into the thing that swallows it. I find that we ourselves, in the end game, of creeping normalcy, unexpectedly find ourselves a part of something entirely different and by the time we know this our trail has disappeared, over grown in weeds, smothered in shadow, dim and viscous. Try as we might the way back—in thought, in person—has vanished. Unless there is some accounting, some record brought down upon the constancy of history. Or, over time we find all is gone and irretrievable. It is important too, to understand exactly who pens the accounts; and who exactly collects the potentially ephemeral; and who selects what to save and what to sacrifice.

* * *
I conserve the written word, the customs of my own and of those around me; to remember our ways; to preserve what memory will shred and time will obliterate; to conserve a little of ourselves and of our faith. Susan Sontag writing in Against Interpretation says, “The notebooks of a writer have a very special function: in them he builds up, piece by piece, the identity of a writer himself.” (gender choice Sontag’s).
In her own journal, published after her death, Sontag writes:

On Keeping a Journal. Superficial to understand the journal as just a receptacle for one’s private, secret thoughts—like a confidante who is deaf, dumb and illiterate. In the journal I do not just express myself more openly than I could, to any person; I create myself.

The journal is a vehicle for my sense of selfhood. It represents me as emotionally and spiritually independent. Therefore (alas) it does not simply record my actual, daily life but rather—in many cases—offers an alternative to it.

There is often a contradiction between the meaning of our actions toward a person and what we say we feel toward that person in a journal. But this does not mean that what we do is shallow, and only what we confess to ourselves is deep. Confessions, I mean sincere confessions of course, can be more shallow than actions. I am thinking now of what I read today (when I went up to 122 Bd. St-G to check for her mail) in H’s journal about me—that curt, unfair, uncharitable assessment of me which concludes by her saying that she really doesn’t like me but my passion for her is acceptable and opportune. God knows it hurts, and I feel indignant and humiliated. We rarely do know what people think of us (or, rather, think they think of us)…. Do I feel guilty about reading what was not intended for my eyes? No. One of the main (social) functions of a journal or diary is precisely to be read furtively by other people, the people (like parents + lovers) about whom one has been cruelly honest only in the journal. Will H. ever read this?

When I began to seriously keep a journal—never a diary—it was at the behest of my drunk of a college creative writing instructor John H. The journal I chose was the exact same one he held up in class that day in 1987 and told us burgeoning writers to keep in their back pockets; my first journal was a black leatherette “Blueline,” 7 ½ by 4 ¾ inches of 192 pages. This journal, bought at office supply stores, was a precursor to the contemporary journal, the ubiquitous, and resurrected, Moleskin. The very first entry in this journal, from 1988, is a perfectly preserved, peeled off, beer bottle label. The first written entry is a farrago of etymology, song lyrics, phones numbers and this little ditty: “You notice at times that in talking to others you become someone else…”

For four years I kept a version of a Blueline in my pocket; it went everywhere I did. Over the years my journals have multiplied greatly—almost at two a year—and of course, have changed in size from the ridiculously small and fey to the gigantic and immobile. Digging through my journals there is evidence of dry periods, and there is a clear indication that in 1991 I began to journal almost full time, a practice I continue to this very day. In fact, this entire essay, save for the historical self-references and entries, comes from entries in my present journal.

To me, my journals have become slate in the stratification of my being; records of my being in time, and place. There are the PlaP Papyruses—a collection of journals written while I lived in Portage la Prairie, Manitoba, my hometown. There is the Calgary Codex, a few meager volumes of erratic, alcoholic diatribe. The Texas Texts are quite impressive in heft and sober tone and my period of late erudition comes through in the Missouri Manuscripts, of which the present volume is to be included. In total these, and the ones to be added in the future, constitute my oeuvre—Dead Me Scrolls.

In 2000, when my brother Kevin died unexpectedly and his “story” ended abruptly, I wondered what would happen to his story, who would tell it now that he was dead, and how could that version be at all accurately preserved being that it would be a biography of another, and as always with our beloved dead, careening toward hagiography? I began to view my journals differently then too, and in fact came to see them as my own apocryphal writings, the kind found in clay pots in Egypt or near the Dead Sea. My scribbles kept alive part of my life, of me, that might outlast me. Kevin was in them, of course, but also the saints of my profane life, my parents, my wondrous sisters, my other brother Michael; the friends I’d had the blessed fortune of knowing; the journal contained paeans to my wife, Dyan, and intercessional words to God. It was as if I was a Bedouin boy, and I’d stumbled upon something that had been preserved, and for a reason not yet certain.

I teach creative writing, and my doctoral studies emphasis was creative writing. I have written and been published for over three decades and have won numerous writing awards both as a journalist and a creative writer. My one piece of writing advice is: Write for yourself. If afterwards, people are interested enough to read your work, it’s pure gravy.

What is one of your favourite books on journal writing or creative inspiration?

I really enjoyed Marion Milner’s A Life of One’s Own. The Gift by Lewis Hyde. Leaving a Trace by Alexandra Johnson is quite good, she was a guest once, years ago, with IAJW.

The one thing I would like you to know about me is – INFJ! Inner nuances fosters journeys. 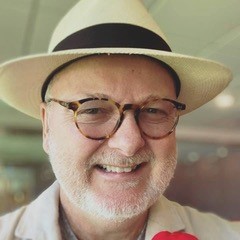 A special thanks to Wm. Anthony Connolly for sharing his wisdom and passion for writing and journaling in this Member Spotlight Interview.